Are you a returning participant from last year?
Click here to register for the 2020 Day of Giving.

Welcome to My Day of Giving Page! 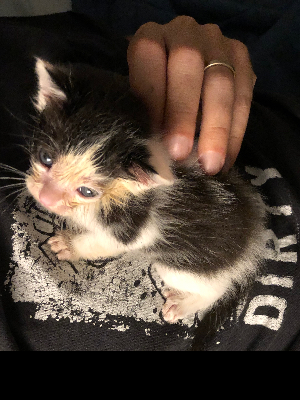 As many of you know, Freddy joined our family over the past year, first as a foster in the fall. He was one of thousands of fragile kittens arriving at San Diego Humane Society every year. He quickly earned the nickname Dirty Fred, because he didn't know how to eat and made a mess of himself (and us!) as he suckled his food and snuggled in our necks. Because he was so reliant on us to eat, he bonded quickly. He needed a lot of medical attention though, and "failure to thrive" was a question as he struggled to gain weight.

We defended him and he reached the benchmarks set for him. When he returned to the shelter to be adopted, he was an energetic spitfire. Unfortunately there was a virus plaguing the shelter and he and other kitten cohorts were indirectly exposed and they had to go in quarantine. This is a sad reality for sheltering, because when you have so many animals together, it's hard to keep everyone healthy. Though he didn't come down with the virus, he wasn't eating well and "failure to thrive" came back into question.

Again we defended him, hoping that being in a home with people would make all the difference. By Day of Giving, it will be 6 months since we officially adopted him. We didn't know if we'd just be fostering him some more, but he's wormed his way into our hearts and our bed, as he goes back and forth between our necks for snuggles. Freddy is just one of many animals who need people to defend them. You don't have to foster or adopt — though thank you if you do!

Will you please consider a donation to defend other animals like Freddy? This is the one time of year that staff actively fundraise for San Diego Humane Society. As we come to the end of our fiscal year, Day of Giving on June 25, 2020, gives us that final push.

Especially this year, we really need added support because of the coronavirus. Animals are still coming into the shelters. By making a donation, you'll help nearly 50,000 animals get the chance they deserve this year.

I’m fundraising specifically in support of our Community Engagement programs, which educate and support the public, promote the healing power of animals and inspire compassion

Thank you for your compassion for animals and the people who love them, and for supporting our fifth annual Day of Giving.

To make a gift by check, please put my name in the memo line and mail to:

If you think this page contains objectionable content, please inform the system administrator.